The weekend of August 26th, 2017 was one of the busiest during the low season in Sosua, specially because of the over-advertised Mayweather-McGregor fight. Almost every bar in town had large screens displaying the event, overflowing space all the way to the sidewalks and streets. Our first stop was Merengue Bar, just below Clasico Disco. The place was packed with people in the bar and lounge areas, everyone mesmerized by the fight happening in those ultra large screens set high in the background. 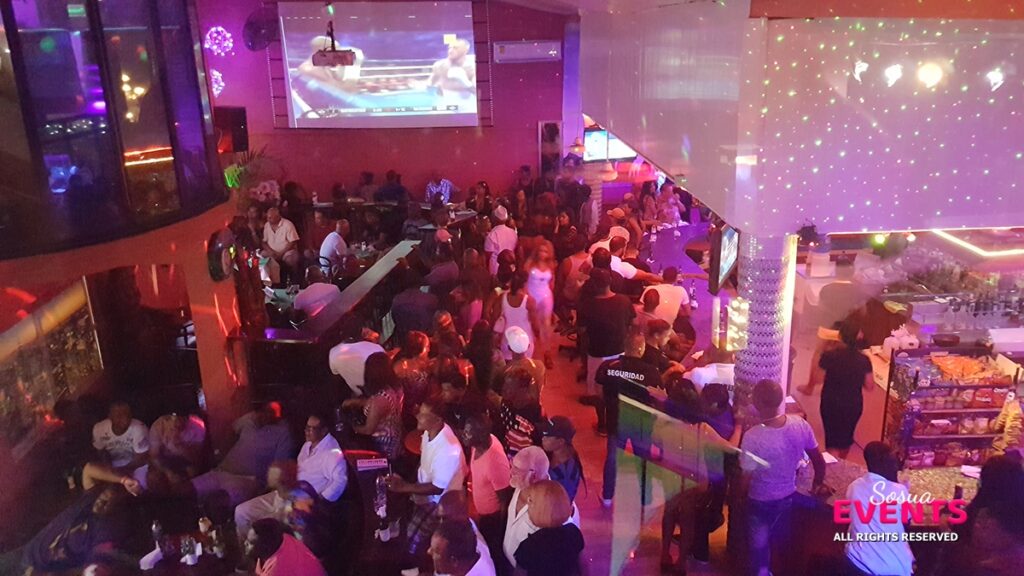 The staff of Sosua Events made their way to the disco ( Clasico )  around 1 am, which had few visitors as everyone was more into the Merengue Bar watching the fighters challenge each other into a final round. It was a perfect time to shoot some photos of the VIP, disco and bars, that can barely be seen when the place is crowded ( see the page on Clasico in our Disco section of the Sosua Events website ). Some notes on the status report of Sosua this month:

The sidewalks of Pedro Clisante street are being remodeled, which has annoyed more than one business owner but still visitors are showing up ( some owners have placed wooden planks while the job is completed ).

The presence of Cestur Police controlling some of the stray Chicas ( single women that sell sex ) from the main street was noticeable, we noticed a bunch of them fleeing on foot from a raid. Sosua has an ongoing dispute regarding clubs and visiting women that clearly are after the tourist males. Some say that closing clubs like Rumba, Passions and CMP only made matters worse, as the women have now taken the streets as opposed to being inside a club out of the public eye.

Security in Sosua has been the best in a decade, thanks to the chief of Police ( Colonel Jose A. Brito ) that has undertaken a serious mission to keep crime low as never before. We strongly hope he will remain in Sosua for long. Some think the police has better support now because of pressure from Carnival Cruises and their Port authorities.

( discos or bars ) in Sosua right now seem to be Clasico`s, Merengue Bar, Premium Bar ( former “El Flow”), Latin Club, Ice Bar, High Caribbean, Chez Mon Real, and a new entry, Sunset Bar ( it was very busy on the night of the fight, nice atmosphere. See our guide for more information on that and the rest of the local bars and clubs of Sosua ). Sosua lights ( city lights ) was also very busy, full of people but we could not enter inside due to excessive smoke from cigars, barely snapped a picture that looked hazy.  One place we found cozy with good service is the Mamajuana Bar, next to the Salado y Dulce Restaurant. In Puerto Plata we recommend Kviar and Marotte Disco.

There has always been the so called “expats bars” where visitors are mostly seniors from Europe and the States, many of which live permanently in Sosua. Among those the Jolly Rogers in Pedro Clisante St., Baileys on Alejo Martinez St., Plan B on Pedro Clisante St., Britannia,( now Matteo`s ) Cubano Cafe, Schnitzel Paradise, ( all on the same main strip ). Germany Bar & Restaurant on the main Highway 5 is also a good choice for those that enjoy German and European food, they have remodeled into a much better place.

Sosua has few new places we can call gourmet, one place we still have to test is Margot`s, located on Alejo Martinez St.; it is the new kid in town. Newly remodeled Bologna still rules as one of the top three, also the only one with air conditioned dining room. Their menu is polished, wood oven pizzas fantastic, and the overall service keeps them on top of the lists year after year. Morua Mai is on vacation during the low season, always a great pick in our list. The Waterfront is also a top pick, with its great location and excellent chef. On the Sosua central plaza, there is an Italian restaurant that stands apart, Ottimo`s. great menu, certified chef and sosu Chef ( Victor is great ) and the setting feels totally different, much like the new standard of places like Bliss in Cabarete. 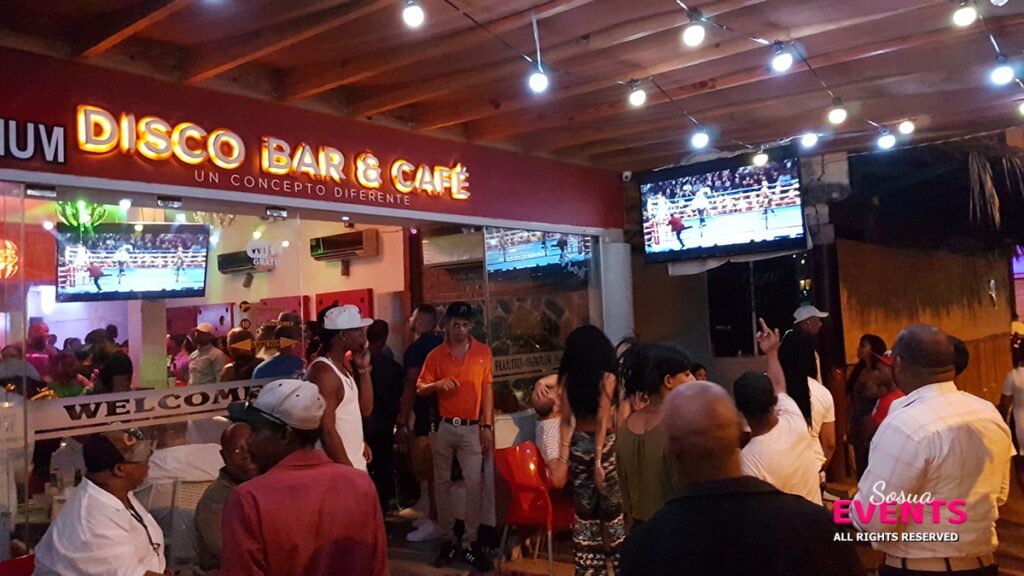 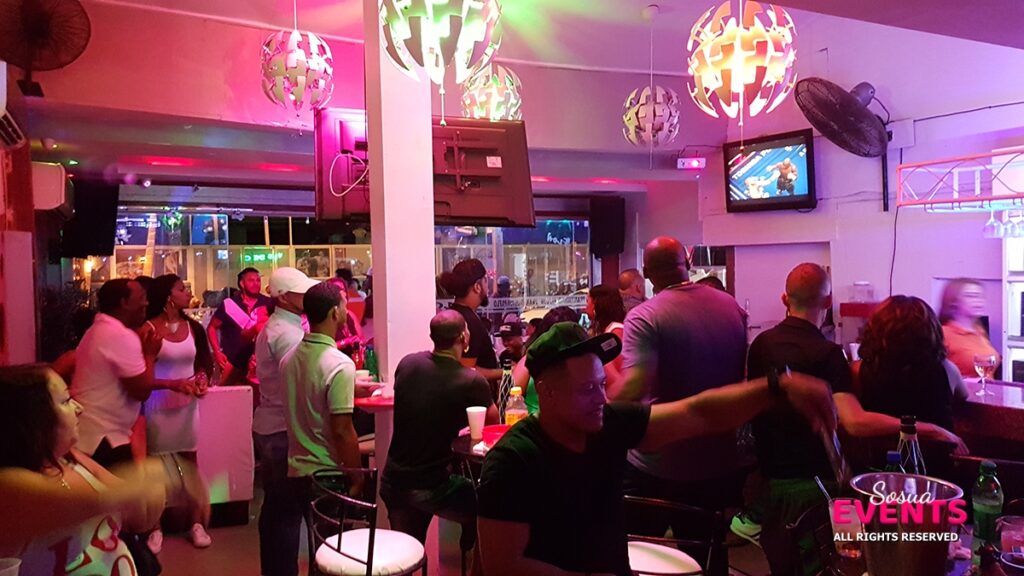 The Premium Disco Bar was the only place where there were lot of people in the disco, bar and outside areas, because they had screens all over the place, a bonus for the visitors that were more interested in night entertainment but also wanted in on the major sports event.  This night everyone seemed to agree on having the best drinks, and an air of camaraderie among strangers and friends was the mood of the night.  Mayweather might have united people on a quest to prove whether the UFC McGregor can become the king of pro boxing- or not.

The Ice Bar in Sosua 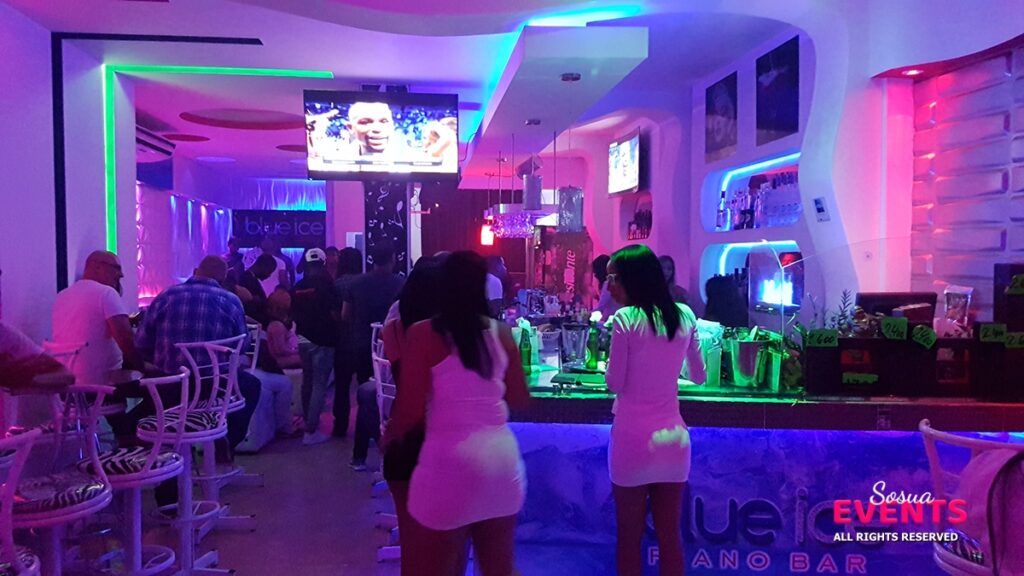 The Blue Ice Bar also had twin screens facing the bar and the lounge, people coming and going all night. The waitresses, neon and decor show good taste and service, making it a favorite since its opening. Next to it, Chez Mon Real was also crowded inside and outside, mostly foreigners. The corner of Pedro Clisante and Dr Rosen has become a hot spot, and while Rumba and Hermans Bar are closed, the remaining ones are very active. If you see one too many motorcycles it is probably because the locals use those guys as quick moto taxis. 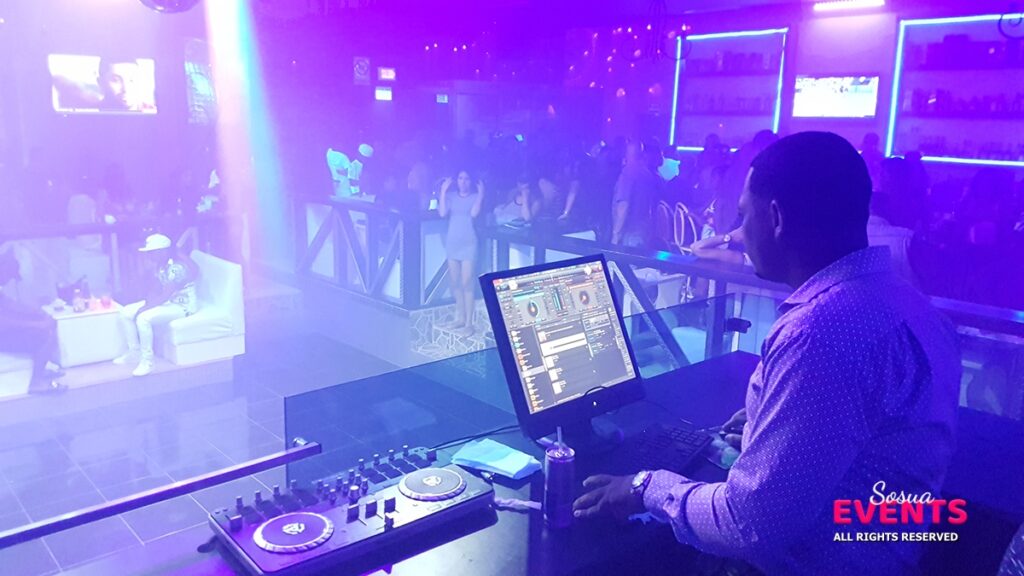 The famous Latin Club was our last stop of a busy weekend, following advice to save the best for last. We were told that this is the after party, after all. Sosua has rules that affect the schedule of night life businesses, so Latin Club started to roll when the others closed on Sunday, that is 1:00am sharp. In Sosua, Clubs close Sunday to Thursday around 1:00am, the rest of the days they close at 3:00am; hence the reason people flock to Latin Club earlier on Sunday nights. The light fx and disco layout looks good, many spaces for VIP and very good security ( we know them all from Clasico ). The guy behind this disco is a savvy guy in the business, been around for long so he knows what people like, and it shows. The guests from Sosua Events villa rentals can book the Latin Club VIP via the free concierge service. 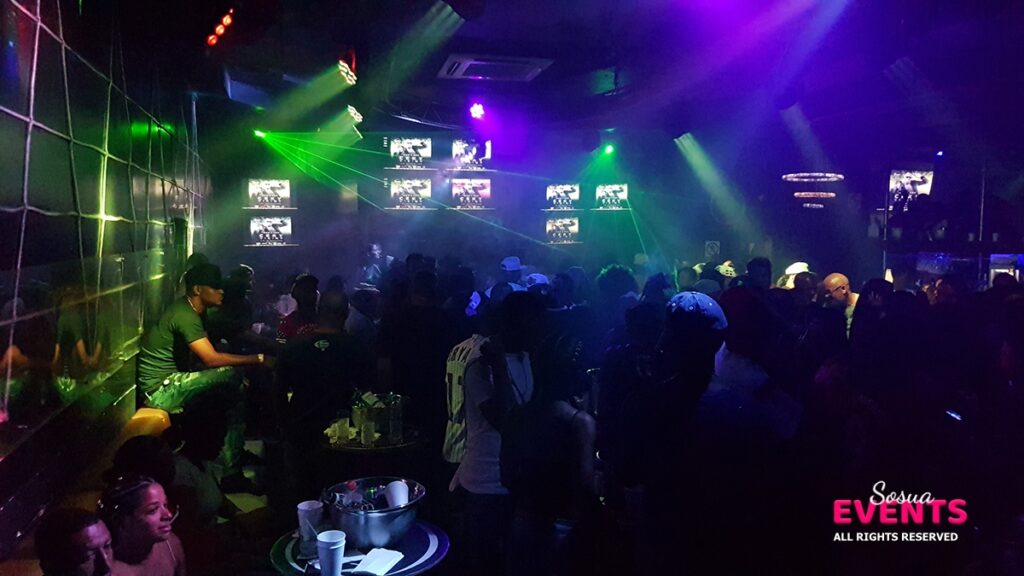 Sophisticated Kviar Disco in Puerto Plata is on our top 3 list of the top clubs to visit while traveling the North Coast, easy to tell why. The location is ideal, easily accessible via the Highway 5, just past the main gate of Playa Dorada. The disco design is close to perfect, light FX well balanced, people from the resorts mingling with locals and excellent atmosphere. Reaching Kviar from Sosua only takes 20 minutes by car, past the POP airport. Kviar is also a Casino, so it`s a breeze to enjoy a casino evening and then top it off with disco dancing to celebrate the big winnings, good luck! 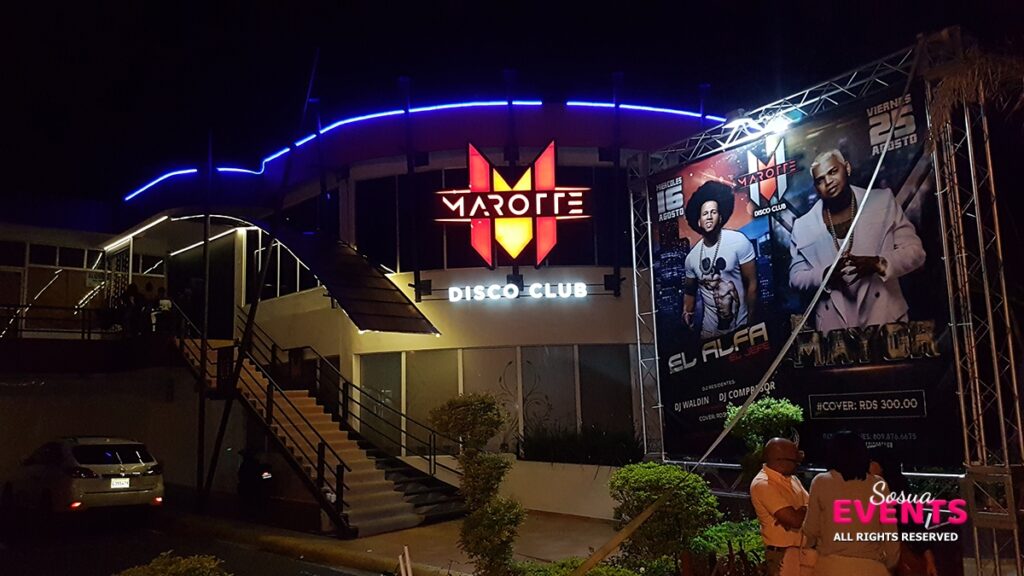 Marotte Disco Club is one of the best night entertainment places in Puerto Plata, always offering new events with well known artists in the island. The club has a good location, accessible via the main commercial avenue of Puerto Plata ( Av. Luis Ginebra ). Inside, the club has a powerful light and sound system,  best to have a seat on the right side VIP where lighting is more moderate. Security looks great, manager and DJ are fantastic, this is definitely a disco we recommend for ages 21-55.